One of the most frequent questions I get as a scientist is "What does a scientist do?". In short, we extend our basic logic to something we don't know yet. Let me give an example. How much apple is produced in Germany in a year? I presume you don't have an immediate answer. But you know how much apple you eat yourself, like in my case I eat maybe 1 apple a month and maybe a bit of apple juice. That makes around 500g of apple a month, and probably around half of it comes from other countries, like Spain for example. That makes 250g a month, i.e. 3kg a year. Multiplied with the number of inhabitants (86,000,000 in Germany), it gives 208,000 tonnes. And I know that around half of all food is wasted, and probably during the production process a lot more gets wasted. So we can multiply it by 3 and we get 774,000 tonnes, which is essentially my final answer. According to Wikipedia, Germany produced 1,032,913 tonnes in 2016 and 596,666 tonnes in 2017. So my estimation of 774,000 tonnes is quite good.

While this kind of guess is quite rudimentary, it often gives a useful insight that we wouldn't be able to come up with intuitively. What's important here is that whatever science tells, what counts is the reality. In the apple example I gave above, science says 774,000 tonnes, but the reality is 596,666 tonnes and in this case we can safely discard what science says. In this sense, what I'm going to talk about below is a set of my estimates, which are certainly better than knowing nothing, but as soon as the real numbers are available, the numbers below should be discarded. But one way or other, I'm also going to describe my considerations, so I hope you'll know how reliable and where it could potentially be unreliable.

The first idea I got was based on what's called Law of mass action, which I thought could describe the number of patients over time. This one consisted of three variables: 1, Susceptible (uninfected ones in the society); 2, Infected (and potentially infect others); 3, Removed (either healed or dead). I then did a calculation and posted the results on Facebook. While posts on Facebook often don't bring anything, this time I got a piece of useful information: my model is basically called SIR model but epidemiologists use this model called SEIR, which includes one more variable, Exposed, which is for the infected ones in the incubation time, i.e. infected, but no symptoms and don't infect others yet. I don't know exactly whether this one variable plays an important role (at least as far as I could see, it doesn't), but this is a particular variable that probably characterizes the current coronavirus, since we have a particularly long incubation period.

I found out that there was this website called data.europa.eu where you can download the number of infections for countries around world. Based on this, I could compare the results between the reality and what it could have been like without lockdown in the last 3 months. 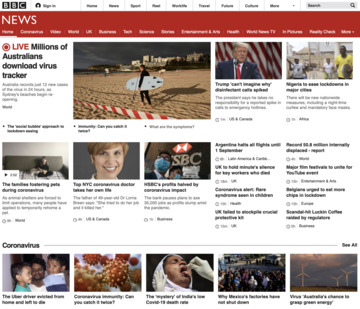 When the first week of effective curfew passed by, I wrote my last article. As there was nearly no transition period, we all directly dived into the quarantine after that. It was difficult to figure out, what kind of mental state we would be, or what kind of life we would be having. As the things drag on, I found out that it was fairly difficult to find it out, partly because people essentially keep telling me they are perfectly fine, even though I never really learn what they were doing. At the same time, the newspapers are getting more and more theoretical, by which I mean it appears to me that they don't really know the authenticity of what they are writing. At least they stopped making scapegoats. That's already an unexpected positive development. I appreciated it, truly. 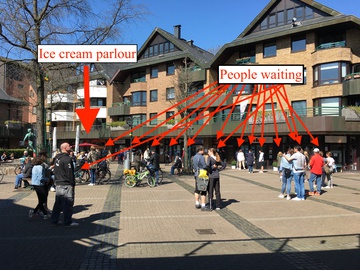 The new reality set in quite quickly. Today, we are not surprised to see that there is no single article unrelated to corona on the homepage of BBC, as you can see on the photo above. Then last week, I cycled along the Rhine again, going through Kaiserswerth. The photo above is what it looked like on the market place of Kaiserswerth. Well, it was a really good weather today, so it's not so surprising that there were people outside, but the amount was extraordinary. Apparently the Germans are not so afraid of the virus (anymore?).

But to be fair, while a whole range of people from medical workers to delivery boys are praised, I must say the greatest praise should go to all the German people, for being extremely efficient and effective about solving the problem. While the nearby countries, such as France of Italy, have laid a real curfew, Germany resisted the move, partly because it has the right capacities for that, but in my opinion the reality was more like when a clear goal such as "cut social contacts" is there, the German government gives a more concise order, and the German people follow the very basic principle of what it means. This is something I still admire here in Germany, especially after I was badly disappointed in France in the aftermath of the terror attacks in 2015, when the politics was much more about exhibitionism than solving real problems. It must have been a horrifying challenge to conduct war against this folk 80 years ago.

However, there's one transition that's really hard to understand: face masks. At the beginning of the pandemic, from Europe to US, all the medical scientists claimed face masks are useless. That could be their scientific conclusion, and science is sometimes also wrong. But they were claiming the telling points at the same time:

I'm pretty sure that you don't need a PhD to understand that these three points are not compatible. And as these scientists never resolved this problem, firstly the people started acting (from the beginning I could see a huge increase in the number of people wearing a face mask). Now the governments decided to openly ignore what WHO was claiming and mandatory to wear a mask, while WHO is still following the contradiction. It is just horrible to make the German government ignore what scientists say, because whatever the media talks about, the German government is usually the one that follows science. It was great disappointment that WHO effectively forced them to take a decision not supported by science. And if ever we find out that this huge difference of fatalities between East Asia could be at least partially explained by the face mask, I don't think it's too much to claim that WHO killed poor Italians, Spaniards and much more. Anyway, however effective the masks actually were, for not being able to draw a logical conclusions from the three claims that they were making, I don't consider medicine as science anymore. This in particular means that I might expect them to know something, but I don't expect them to understand anything anymore.

In the meantime, we should rethink of the fact that we were entirely unprepared in many ways when the crisis started, and think of how we could be prepared for the next stage, namely the restrictions are eased. I'm very sure that we are all looking forward to the return of normality, but what we are looking forward to might not necessarily what is waiting for us. This has essentially shown to be true in Japan, the country of natural and human disasters, because recently there was an article about Fukushima, where they looked at the suicide rate around the area affected by the earthquake. They showed that right after the earthquake, when the cities were devastated, the suicide rate went down significantly to go below the national average. A few years later, when the normality came back, the suicide rate overtook the national average. According to this article, it was not only this time that they could observe this phenomenon. This article was particularly striking to me, because indeed when the coronavirus badly hit Germany, everyone was acting cooperatively and exemplarily, as I stated above. What if this is driven by some hope which allows them to look forward to a reality that actually does not exist? This is at least what the cases in Japan show, because if you had asked a rational person after a natural/human catastrophe in Japan, they would have certainly said what they would expect is the return of their normal life. Yet, the statistics shows that the reality failed to meet the expectations. Maybe because we simply always glorify the past? I don't know. Anyway while today we are very much looking forward to a "normal life", we should maybe think about what that actually means and what we are specifically looking forward to.